As a cyclist, I think you learn to react quickly to changing situations. Whether its winds causing echelons, suddenly finding yourself in a good breakaway move or dodging crashes, we get our brain put to the test very often. Especially in Singapore where cars have yet to fully accept cyclists as fellow road users, we are constantly slamming on the brakes, swerving to go around buses that “chop” your line, and riding in scarily narrow straight lines when cars squeeze you into the curb. When i see incidents on the road, i often think about how I would react if i were in that situation. Yesterday, that wondering came to very good use. 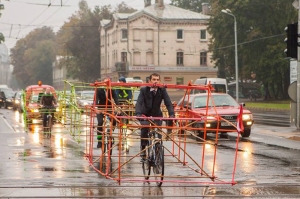 I was on another two-wheeled mode of transport (one with an engine, ie. free speed) when a car turned across my path. Out of instinct I slammed on the stoppers and tried to aim for the clearest piece of tarmac. With cars coming at me in the opposite direction, I had a small window to get off scot-free and squeeze between the errant car and the oncoming traffic. I hit the car. Or the car hit me. Or whichever way you want to see it.

I’d like to think that my bike handling skills are awesome and thats why i kept it upright, but in reality the big man up there threw me a bone. Split second of additional reaction time and I would have been doing gymnastics like Jackie Chan in a Hollywood movie.

Now fuming that I had been hit, I admit I didn’t use the calmest tone of voice to confront the driver and his passenger. They immediately asked if i was OK, which i said i was, but i was still venting my anger with harsh tones. Was it necessary? Absolutely not. These were reasonable human beings who wanted to know if i was OK, and must have also been traumatised by the loud thud as my bike crashed into the side of their car. If you read this, I apologise for not being calmer.

The takeaway from my experience is that no matter how angry you may feel, try as best as you can (we all think irrationally sometimes) to stay calm and as cool as a cucumber. It will help resolve the situation a lot faster and your blood pressure won’t send veins bulging in your neck. Safe riding everyone.

P.S. practice anticipating vehicles actions. Just like how in a group you look at riders shoulders to anticipate their movements (you’re doing this already right???), look at brake lights, tyres turning and drivers view points.

One thought on “Be cool…”